This is an unofficial RuneScape client that could connect to any RuneScape private server which supported it. In addition, the client could also be run in an offline mode, in which case it functioned something like an extremely rudimentary single-player version of RuneScape with cheats included. I am almost certain that I first downloaded MoparScape sometime during my second play session of RuneScape, which began around November 2006 and ended in late August 2007, but from what Web site I downloaded it, or even the details concerning how I learned of its existence, are unfortunately things which I have now forgotten. Nor can I remember anymore the specific version I downloaded all those years ago, but I was at least able to locate working copies of both version 3.1 and 3.2 of the MoparScape client, both of which, I can confirm, are very close to what I remember using back in the 2000s (with version 3.2 being slightly closer), which upon startup would immediately play that song from Doom and display the distinctive login screen with the two cars: 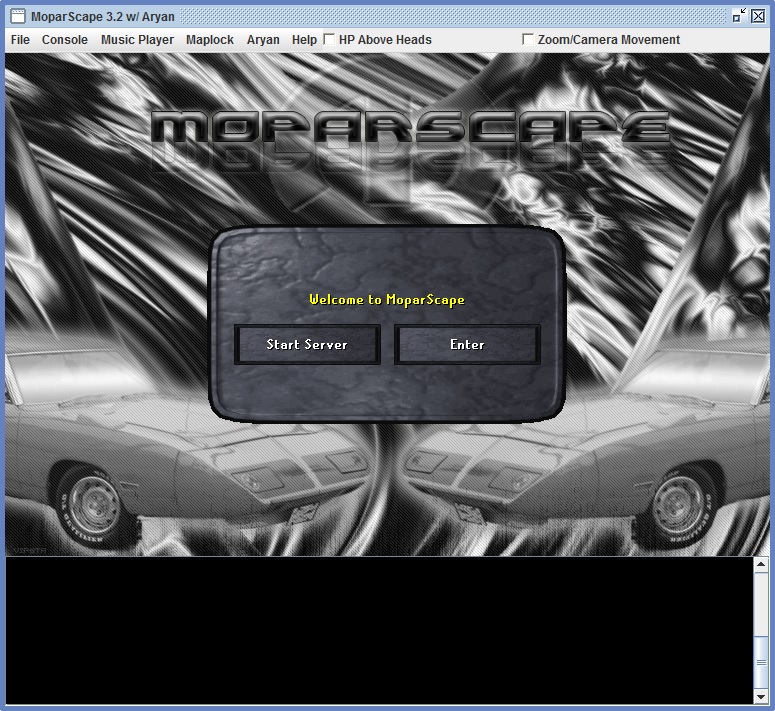 Although, apparently, MoparScape was intended to be used to connect to and play on the various private servers, I don't believe I ever once used it for this purpose. I only ever ran it in the offline mode, where cheats were enabled but functionality was greatly limited, and consequently I viewed it more as a toy than anything else. It was possible to instantly spawn large numbers of coins or rare items (e.g. partyhats) within the client, but I never took much interest in doing this, as it was not the real game and hence obtaining the items in this way felt empty and meaningless. Typically I preferred walking around, often with the noclip cheat enabled so that I could pass through walls or walk on water and thereby venture into normally inaccessible areas; other times I used the built-in teleportation cheat to quickly move my character around and explore distant areas of the game world. On other occasions, I recall, I would spawn various monsters to amuse myself, though actually fighting them was pretty disappointing: they all died after a single hit, and, in the case of non-human monsters, their bodies would become heavily deformed because their death animation had not even been implemented properly, as can be seen in the image below in the case of a blue dragon. 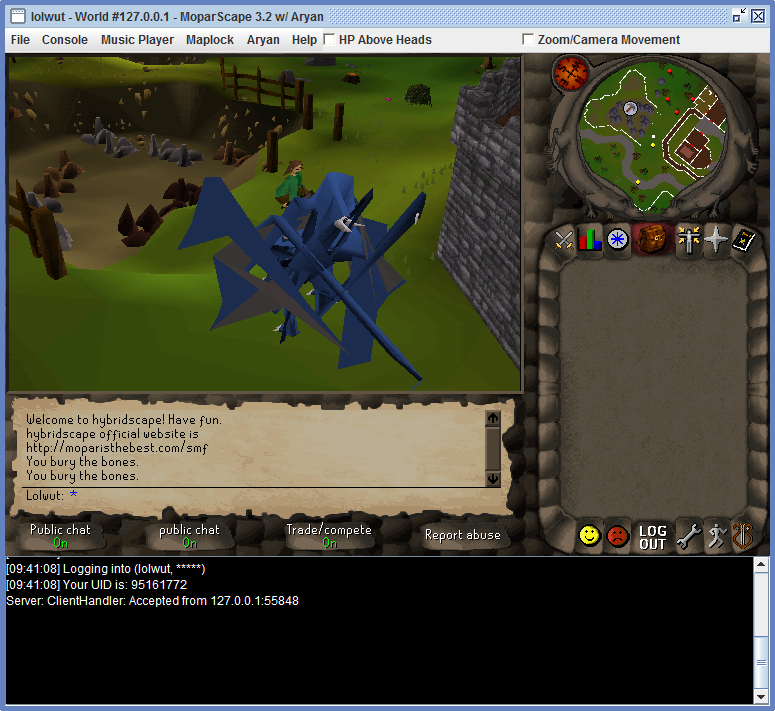 Once the novelty of these cheats wears off, I would imagine that, for most, there is very little appeal to the MoparScape client's offline mode. The copy of the game world contained within it is almost completely without NPCs, all skills have been implemented either very crudely (e.g. Mining and Woodcutting) or not at all (e.g. Agility, Fishing, Herblore, and Thieving), no quests or mini-games work, and it is not possible even to climb stairs or ladders to access other areas, among many other missing features; even attempting to spawn certain items or NPCs will cause the client to throw an error and forcibly log you out.

And yet, despite all these serious deficiencies, on occasion I still found myself spending time in the client's offline mode throughout the late 2000s. I recall with certainty that whatever version of MoparScape I downloaded and used back in the 2000s had the original user interface, which meant that it was a copy of RuneScape before the big interface re-design that was released on 27 September 2006. (In particular, versions 3.1 and 3.2 of the client are both dated sometime between the release of the Recipe for Disaster quest on 15 March 2006 and the release of the In Aid of the Myreque quest on 22 March 2006.) My main motivation, then, for returning to it was (unsurprisingly) nostalgia: I enjoyed walking around in and exploring what was essentially a time capsule of 2006 RuneScape, and felt much nostalgic pleasure when I once again saw an old version of something which no longer existed in the real game. As the late 2000s progressed, and RuneScape continued to change and stray further and further away from its golden era, I increasingly came to treasure this static copy of the game from 2006 which had been preserved in the MoparScape client, and I would often find solace in starting it up and revisiting the old interface, the old versions of some cities/towns and monsters, the old (pre-HD) graphics, etc. This was years before the launch of Old School RuneScape or my discovery of private servers which emulated pre-2007 versions of the game, and so the MoparScape client's offline mode was, for a time, my only real method for satisfying my old RuneScape nostalgia.