Home > Computers, Technology, and Internet > Microsoft > The One True Browser

The One True Browser

I have been using Microsoft's Internet Explorer as my primary Web browser for 17 years and counting. There is not a single doubt in my mind that it is the One True Browser.

We got Internet access in our house for the first time around November 2003. At the time, I was using Windows XP, which comes bundled with Microsoft Internet Explorer 6 (IE6) by default, so my first peek at the World Wide Web (and, I recall, some FTP sites here and there) was through IE6. Of course, back then I didn't even know what a Web browser was; I simply believed that the little light blue lowercase e was how I opened the Internet.

As I am a fellow who tends to get stuck in his ways and is largely skeptical of change, I continued to use IE6 as my primary Web browser for nearly six years, until around October 2009, when I was pretty much forced to stop using IE6 when I upgraded from Windows XP to Windows 7, as IE6 just doesn't work on Windows 7, despite my efforts at the time to try to get it to work. I switched to the latest version of Internet Explorer at the time, which happened to be Internet Explorer 8 (IE8).

I would use IE8 as my primary Web browser for about another six and a half years, from around October 2009 to around April 2016, at which point I switched to Internet Explorer 11 (IE11) because, by 2016, far too many Web sites had become incompatible with IE8, and I found myself having to use Firefox (which I installed only as a secondary browser for those sites that, for some reason or another, refused to work in Internet Explorer) more and more. As of March 2021, I use IE11 as my primary Web browser; it is also the only browser I use to test and view all the pages on this Web site. As it is the last version of Internet Explorer, and there are no more newer versions to switch to anymore, I will continue to use IE11 for the foreseeable future.

A lot of people find the fact that I have been using Internet Explorer for 17 years unbelievable, but it's true: I have remained loyal after all these years. Even when, as the 2000s progressed, I heard talk of Firefox and how it was better, and even when Google released their Chrome browser at the end of the 2000s and it seemed to be the talk of the town back then, I stuck true to my roots and remained loyal to Internet Explorer. (Well, almost: for the sake of thoroughness, I feel that I must mention that, for perhaps a week or two in probably 2008, I might have, ahem, experimented with using Firefox as my primary browser—but you must understand, I was young then! Besides this one moment of curiosity, I can proudly say that I have been using Internet Explorer as my main browser continuously from around November 2003 to the present.)

The early/mid-2000s were a wonderful time for Internet Explorer. According to TheCounter.com, OneStat.com, ADTECH, and WebSideStory (data which Wikipedia has very neatly organized), during the early and mid-2000s (and, really, during the end of the decade as well) Internet Explorer absolutely dominated the Web browser market, with some years having a market share of over 90%, or even over 95%. I remember these days very fondly, back when it was considered very normal to use it as your main browser, when pretty much everybody did so without a second thought, and when it was not widely mocked and ridiculed like it is today.

After this peak, though, Internet Explorer's market share has been falling ever since, as you can see in the following two figures (click for larger versions). 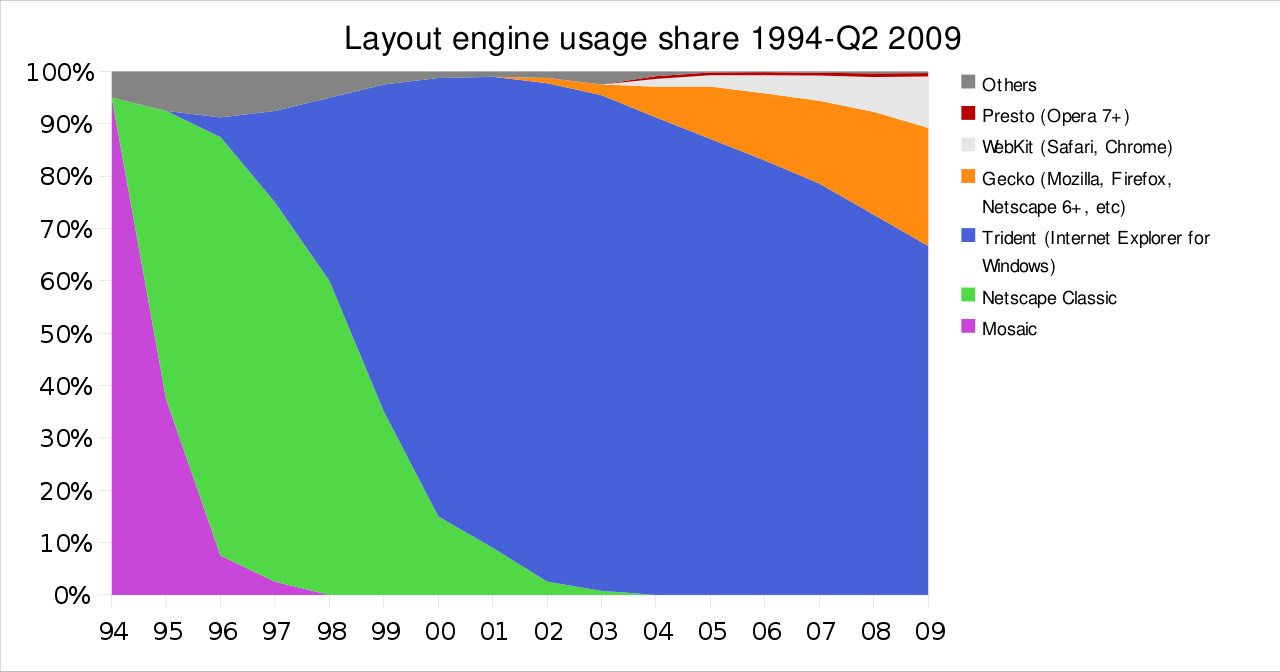 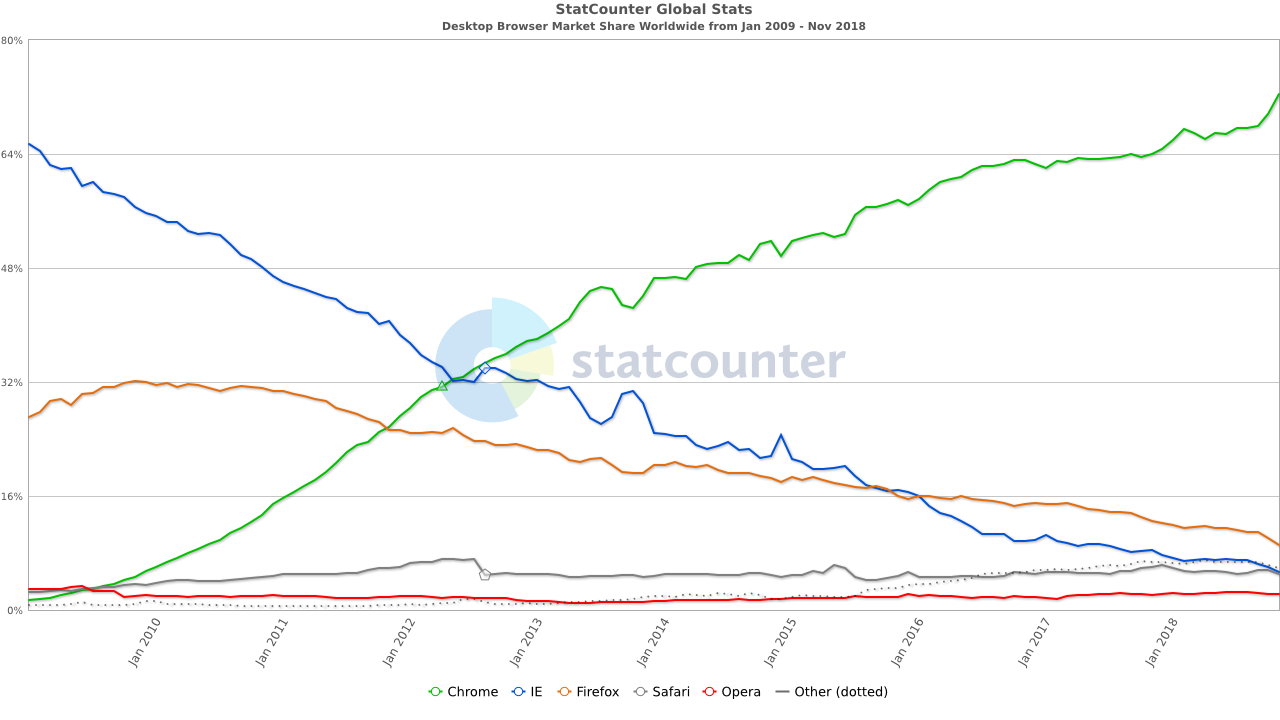 It really is a sad thing that happened to Internet Explorer's usage share: from peaks of over 95% usage in the early/mid 2000s, I have witnessed it fall to less than 50% usage, to then losing its 10-year lead in the browser wars to Google Chrome, and to then falling behind (according to some organization's numbers) Firefox and even goddamn Safari. According to StatCounter, Internet Explorer had a mere 2.51% market share in September 2020—a truly terrifying drop from the dominating numbers of the 2000s.

It has been hip and fashionable for many years now to insult and mock Internet Explorer. I remember at first it was only the Web developers and other computer-savvy folks who criticized Internet Explorer after Firefox was released; this did not bother me much, as they could actually provide serious technical reasons as to why they believed Internet Explorer was inferior. Soon, though, that attitude of mockery towards Internet Explorer spread to the mainstream, and now it was considered cool to make fun of it, especially among younger folks. It was truly infuriating for me when those who didn't have the proper technical background and knowledge on the subject nevertheless blindly ridiculed Internet Explorer and called it a terrible browser; when asked why they thought this, oftentimes they could give no other reason than, Because all my friends think so! or It's what everybody else says! or Because it's Internet Explorer, dude! (so you mean to say that Internet Explorer is bad because it is itself?). What a bunch of utter dumbasses, honestly.

In recent years, I often get funny looks, and a few times even laughter, when I tell people that I use Internet Explorer as my main browser. I would not be surprised if, back when I was still attending university, I happened to be the only undergraduate in the entire computer engineering department who used Internet Explorer as his primary Web browser. If you are part of the anti-Internet Explorer crowd, then you might be thinking about how I could still possibly use Internet Explorer despite the subject of my university education, but I see it the other way around: because I have learned these things, I am even more secure in my convictions now than in the past.

It seems today that most remaining Internet Explorer users stick to it either because they don't have the technical knowledge or skill to switch to another browser (generally, a lot of the computer-illiterate older folks fall into this category), or they have no choice in the matter and have to use it, perhaps because their job requires it in the name of legacy support. I would imagine that, nowadays, us true devotees of Internet Explorer, those who possess both the knowledge and the freedom to switch to another browser, and yet willingly choose to stick with it as their primary one, are very few and far between. I am one such person, and, sadly, I have not yet met another. If you are also among the enlightened, then please do not hesitate to contact me; we must stick together, after all.

I have been on this road for more than 17 years now. I have far too many warm memories and experiences accessing and browsing the Web through Internet Explorer to give it up now. I would think that many, many people took their first peek at the Web through Internet Explorer, but most of them have now betrayed their initial guide by abandoning it for another browser—but not me! I shall stay on the path of enlightenment, and I shall stay true to the One True Browser!