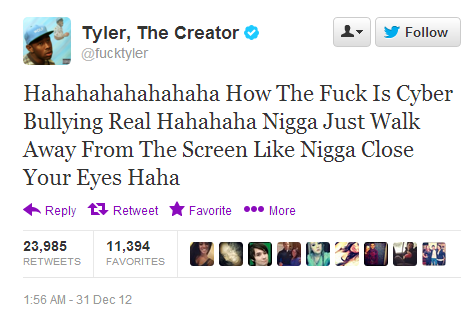 I don't listen to his music, or even rap music in general, but I love this man and his antics. This now-famous tweet of his making light of cyberbullying is a fine example of not taking Internet drama seriously.

It is not just this one tweet, however: Tyler, the Creator has upset SJWs and the hyper-politically correct on more than one occasion, not because he is some dedicated political right-winger, but because he's a normal, reasonable (and slightly mischievous) guy who likes to mock stupidity when he sees it. (I think he would make an excellent troll.) Consider, for instance, another one of his tweets, this one responding to the band Tegan and Sara's dead-serious whining about his rap lyrics: